Building a better work world, plus more. We take on the responsibility of operating your HR department to prepare your company for the future of work with innovative HR strategies and solutions.

Build a future-ready workforce. Our multi-disciplinary team of recruitment consultants listen and understand your needs. With almost 20 years of proven track record and industry expertise, we deliver the right people that fits, not just jobs but company cultures.

Get the Singapore working visa application right, the first time. Local HR and compliance experts work with you in applying for the right working visa for your expat team.

HRPlus helps businesses prepare for the future of work.

Hybrid, digital, human-centric. The world of work is evolving and HRPlus helps you navigate this new path, forward.

Building a better work world, plus more. We take on the responsibility of operating your HR department to prepare your company for the future of work with innovative HR strategies and solutions.

Build a future-ready workforce. Our multi-disciplinary team of recruitment consultants listen and understand your needs. With almost 20 years of proven track record and industry expertise, we deliver the right people that fits, not just jobs but company cultures.

Get the Singapore working visa application right, the first time. Local HR and compliance experts work with you in applying for the right working visa for your expat team.

Since 2018, more than 200,000 Singaporeans and permanent residents were employed on term contracts, making up 11 per cent of the resident workforce – a rate that has mostly held steady in the last 10 years but is expected to raise in the future post pandemic as more companies evaluate the future of work and adopts more work from home and flexible work arrangements. With the ongoing COVID 19 pandemic and economic restructuring within the local and global economies, many HR consultants have observed that contract staffing Singapore employment arrangements are likely to see an increasing trend.

In Singapore, the Ministry of Manpower (MOM), National Trades Union Congress (NTUC), and the Singapore National Employers Federation (SNEF), have jointly developed a set of Tripartite Guidelines on the Employment of Term Contract Employees The intention is to provide some form of employee protection amongst the resident workers working as contract staff or freelancers in Singapore.

Some contract workers working for the same employer for a long time do not currently enjoy benefits such as annual leave, sick leave or childcare leave, as they are on separate contracts shorter than three months and renewed with a break in between, according to the Ministry of Manpower.

“Hopefully, these guidelines can help close the loophole where fixed- term employees can be short-changed by unscrupulous employers who deliberately break their contracts to deny them their statutory employment benefits,” said National Trades Union Congress assistant secretary-general Zainal Sapari.

For instance, an employee working for the same firm on three consecutive month-long contracts is entitled in his fourth month to benefits like two days of paid annual leave, based on seven days of paid annual leave a year. He qualifies as long as he does not take a combined break of a month or longer in the three months. The breaks do not count towards his length of service.

Employers should keep to the notice period for early termination in the contract, according to the guidelines. If the clause was not included, employers can check the Ministry of Manpower (MOM) website on what they should do.

Notwithstanding the above, these are only “guidelines” and many employers or service buyers are not obliged to follow or comply. It is not enforceable or applicable on freelancers, or contractors working under “contract for service” arrangements. It is hope that in the future, the Singapore authorities may wish to enhance this guidelines with laws and regulations which can be enforced across all employers and service buyers. 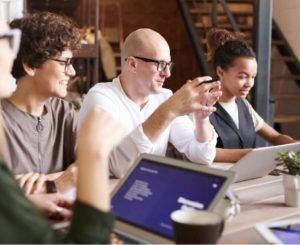 Resident employees working as contract staff, freelancers or term contracts are on the rise. According to data from the Ministry of Manpower (MOM), residents working as contract staff increased almost 9 per cent from 2010 to 2015, about 202,400, or 11 per cent of the resident workforce in 2015. In March 2017, Manpower Minister Lim Swee Say noted that there were 200,000 freelancers in Singapore, again reconfirming that they make up about 9 per cent of the workforce. Of these, about 167,000 workers were “primary” freelancers – workers who freelance as their main job. These include insurance agents, private-hire car drivers, hawkers or stallholders, and private tutors. The remainder were “secondary” freelancers, representing about 1.5 per cent of resident employment. These workers freelance part-time alongside other jobs and would include students, housewives or retirees who take on side jobs for additional income.

Freelancing or Contract Staffing has and will increasingly become a trend in the future workplace. Most of the contract staff arrangement are also being done via an outsourced contract staff arrangement with third party contractors or employment agencies. These agencies are also known as professional employer organization (PEO) and the candidates are placed with these agencies as Employer on Record (EOR). Industries such as IT, financial services, engineering, pharmaceuticals, and oil and gas, where businesses are structured heavily around projects, have the greatest propensity to use contract staff. But there is also increasing demand for contractors in blue collar professions as can be seen from the data above.

According to 2014 PwC survey, almost all employers expect that at least a fifth of their workforce will be made up of contractors or temporary workers by 2022. The COVID 19 pandemic in 2020 has accelerated this process further. The work from home experience during the pandemic over the past couple of years have shown that productivity is not necessarily affected when employees work from home. In fact, many employers are considering making work from home a permanent feature of the work arrangements.

While older employees may view working in the office as natural order of things, the younger employees view operating remotely as completely normal since the pandemic hit. For certain industries and job roles such as those in creative development and production, face-to-face collaboration is essential. In other industries such as technology and media, working flexibly and from home may be more acceptable.

Beyond material benefits and financial remuneration, contract and transient employees will be increasingly cognisant of professional development opportunities within these roles.

The biggest drawbacks from contracting, due to the shorter nature of the work, revolve around the lack of being able to influence big changes and ideas within the company and its business, something that could impact the strength of the candidate’s resume in the long run.

Supported by the technology and social media as well as the rise of the portfolio career, more and more workers come to realise that they could enjoy more flexibility and varied challenges by working freelance or as a contractor for multiple companies.

No comments to show.